Playa El Emir is the second beach on the Atlantic coast of the peninsula.

It is named after an eccentric visitor of Punta del Este, Emir Emin Arslan, who built his house on that beach during the twenties.

Even after the construction of the Rambla it has remained an attractive beach, though the sea is deep and relatively dangerous.

There are lifeguards there during the summer, but it is active all year round as it is the favourite of surfers. 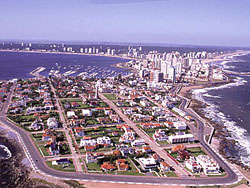