Its american style layout, of 6,823 yards, was designed by Enrique Serra and has the peculiarity of very long fairways, numerous and deep bunkers and fast greens.

The latter are due mostly to its slopes and its grass, which is the type Tifton 328.

It also has five artificial lagoons, which served both as decoration as like an obstacle for the players.

On the Club's main entrance there's a magnificent driving range, with ten roofed and twenty open cabins, putting green and practice green, where you can hire instructors.

This course holds tournaments throughout the whole year, even though the most important activity occurs between december and february, when practically tournaments are played on a daily basis. 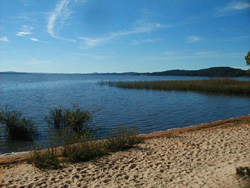