Cantegril Country Club Golf Course is located in the Golf neighbourhood, 5 minutes away from the Peninsula.

It was inaugurated in december 1947, ten months after the club's home building in Cantegril neighbourhood was constructed, in lands that by then were owned the Punta del Este Golf Club and the Municipal Government.

The new course was lifted over the foundations of an old one that had only 9 holes, and that was constructed in 1929 by initiative of José Willemen and Ernesto Van Peborgh, former owners of the land.

It original layout was designed by Alex Philip, while the final improvement that took it to 18 holes and 6,261 yards in 1947, was in charge of the northamerican Luther Koontz.

Over the years it had suffered other modifications, like the improvement of its green in charge of Emilio Serra and the installation of an advanced computarized sprinkling irrigation system in 1992.

The tee and fairway area is planted with "Bermuda Maritima" lawn, while its greens have "Creew Show" (Bent).

The Cantegril Country Club's Championship also is held here since 1948. 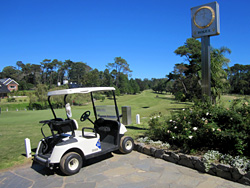