The Sentry Box of San Carlos is a symbolic replica of the ones set up in the Fortress of Santa Teresa, in the department of Rocha.

It was erected in the Artigas Square in homage to Colonel Leonardo Olivera (1793-1863) and other citizens of San Carlos that fought in the Independence Wars.

During its inauguration, on April 19th, 1953, the city payed tribute to the Colonel's mortal remains, which were brought specially by the National Army from the Cemetery of Pan de Azucar.

The urn spent the night guarded next to the Sentry Box, and then was taken to its final destination in the Fortress of Santa Teresa. 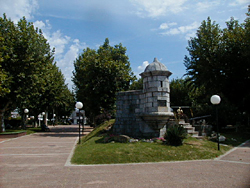