This block of marble was rescued from oblivion in 1895 when it was dug up and brought to Maldonado from the Sierra de Carapé, by order of the Political Chief of the Department, Colonel Melchor Maurente.

Originally there were three of these marble boundary stones, and their purpose was to mark the frontier between the Portuguese and Spanish Empires after the Madrid Treaty of 1750.

Another of these "marcos" or frames still exists in the department of Rocha. 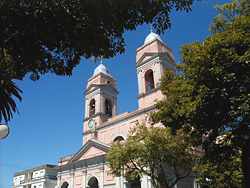