Currently, the Wolves Island is one of the two most important seawolves reservations in the world.

From a geological point of view it is a rock mass, with a height of 22 meters in its highest part, practically without veggetation, of igneous origins with a predominance of reddish granite.

It is surrounded by rocky formations among which the largest is the one known as "El Islote" (The Islet), with an extension of 2 hectares.

It has a lighthouse - the strongest of South America at sea level - built in 1907. Before, there was another one built in 1858.

Its focal height is 66 meters. It has a geographical and luminic reach of 21.5 and 25.5 miles respectively, with a luminic intensity of 1,080,000 candelas. It sends out a sparkle every five seconds.

Its system is based in a rotative machine over a mercury bucket and was electrified in 1958. 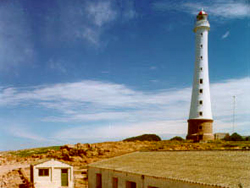