EXTENSION: 2 km long by 1 km wide at its narrowest point.

Gorriti Island takes it's name from Commander Francisco Gorriti, who was prisoner on the island during the first half of the 18th century. Nowadays it's a natural reserve, declared national historical patrimony.

On the West side of the island there is Playa Honda (Deep Beach), a small bay which is a meeting point for yachts and motor boats during summer.

Commercial boats arrive at Puerto Cańón (Canon Port), on the East coast. There is a small restaurant and the overseer’s office.

It's a lovely place to spend the day, having barbecues or swimming; sailing around the island is a lot of fun. Spending the night is forbidden though. 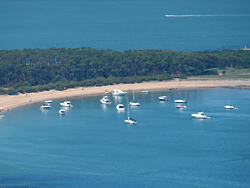